COPA EUROPE sets high goals for storytelling of live sports. To support those goals, COPA EUROPE partners are developing technology and solutions that are interwoven into an integrated platform to power an enriched supply chain of the live sports storytelling. In this post I will provide an overview of this platform.

The COPA EUROPE platform includes components that: (a) handle the flow of the live content supply chain from its ingestion at the event to its consumption on a mobile App; and (b) provide the “story” experience for that live content in an integrative and coherent way.

In this way, some of these components provide compartmented functionalities, other components provide the glue across the board from one end to the other. Overall, a world is built for the storytelling for each of the produced sporting event. 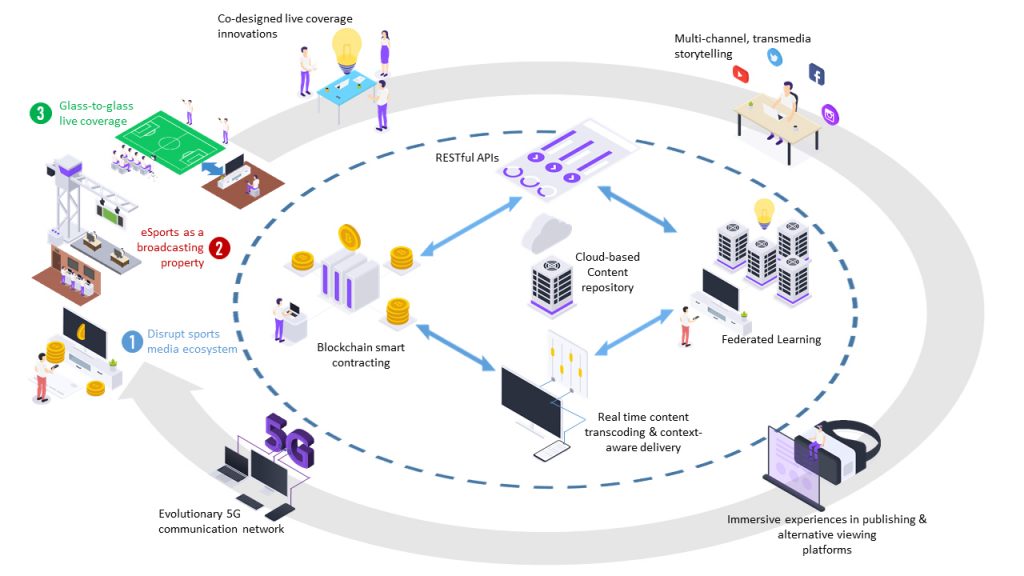 COPA EUROPE includes a Blockchain platform that serves the whole supply chain of the live video, an Artificial Intelligence (AI)-enriched Media Asset Management platform, a cloud-based Over-The-Top (OTT) streaming platform, a media contribution and transaction management platform, esports and/or remote production platforms and a 5G network carrying the traffic. It also contains an AI-based personalization recommendation component, a viewer App that communicates with many of these platforms to create the desired experience as well as a User Generated Content (UGC) App for additional coverage of the live events.

A main axis in the storytelling is its social relation. Unlike traditional linear TV and even current OTT services, COPA EUROPE envelopes the live stream with various social related capabilities. It offers ser Generated Content (UGC) to become an integral part of a professional production of an event. It adds real time content from social networks into the stream – done by an AI platform analyzing the relevant social content in real time. It adds Blockchain-based mechanisms along the video supply chain to allow sharing it in real time with various other outlets, to monetize on it in various ways including authorized P2P selling, to socialize with the various human stakeholders such as rewarding by the viewer to the UGC creator, and more. At this stage of the project details of the Blockchain implementation can not be disclosed yet.

However, it does have to deal with various conflicting requirements in several varied use cases. For example, on one hand it has to be scalable to accommodate thousands or more simultaneous events and/or even hundreds of millions of viewers, while at the same time it has to be low-cost per transaction no matter what the scale is and react in real time (few seconds for some of the UCs). On one hand it has to honor the rights of their holders, their choice of distributions and utilization, and on the other – it has to strictly protect the privacy of all stakeholders while still allowing the interactions between them and reselling of the content. In this environment we expect the Blockchain platform to not be fully decentralized.

The content recommendation engine uses federated learning for its AI algorithms. Since the audience base is quite large, rich data can be collected for the continuous federated of the engine. Since the content (and subsequent audience/fans) vary quite a lot, e,g. between a physical hockey game to an Overwatch teams esports tournament to an online test match, the AI will learn the differences and accommodate its recommendation to that, and federated learning is a good way to handle this variety and scale. Personalization is done in several ways such as recommendation per expected preferences, focus on fan-entities (teams, players), personalized metadata, fractional content purchase per preferences rather than in “packages” and more.
The media streaming platform is cloud-based having three main stages:

This platform receives the live video from the professional video contribution solution as well as from the UGC, encodes it in the right formats and bandwidths for the viewers, forwards it also to the MAM for recording and other processing, integrates it with the social media metadata components, and streams it to the relevant viewers Apps according to their preferences and their viewing rights. The Blockchain platform supports these functions.

COPA EUROPE includes a platform to support the unique esports production. Since there are specific functions in esports production, such as playout manager, spotter and others, and since the desired viewing experience is expected to be highly energetic with several camera feeds, commentaries, extensive graphics and even Augmented Reality/Extended Reality (AR/XR), a platform supporting these requirements is developed to allow both on-site and remote production. It includes all the necessary components as well as “hooks” for additional 3rd party software to further enrich, and customize, the experience.

The professional live video contribution involves transmitting the events from anywhere, in linear TV quality rather than the lower “smartphone” quality, and at high reliability. Several cameras from the same events are supported even with a single transmitter. Remote production of such an even is thus enabled, with production and processing software tools in the studios or clouds rather than having to travel to all these sites. Multiple cellular or other IP links may be used to provide the necessary reliability and quality. The video stream(s) being transmitted can then be shared, for free or transacted, with multiple outlets such as various OTT, social networks and even linear TV stations. This flow is also supported by the Blockchain platform.

The transmission from the event of both professional content and UGC, as well as the viewing in the smartphone, is carried over a 5G network. It is not mandatory, yet performance may be better when using the 5G network. COPA EUROPE uses a Stand Alone (SA) 5G network, ie a network that is not back-relying on earlier 4G and thus impacting performance. The platform allows QoS differentiation for UpLink (UL – from the event) and DownLink (DL – into the viewer smartphones).

We’ve thus briefly reviewed the multiple platforms and components of COPA EUROPE and how they work with each other to provide the end-to-end storytelling of sports and esports over OTT channels.